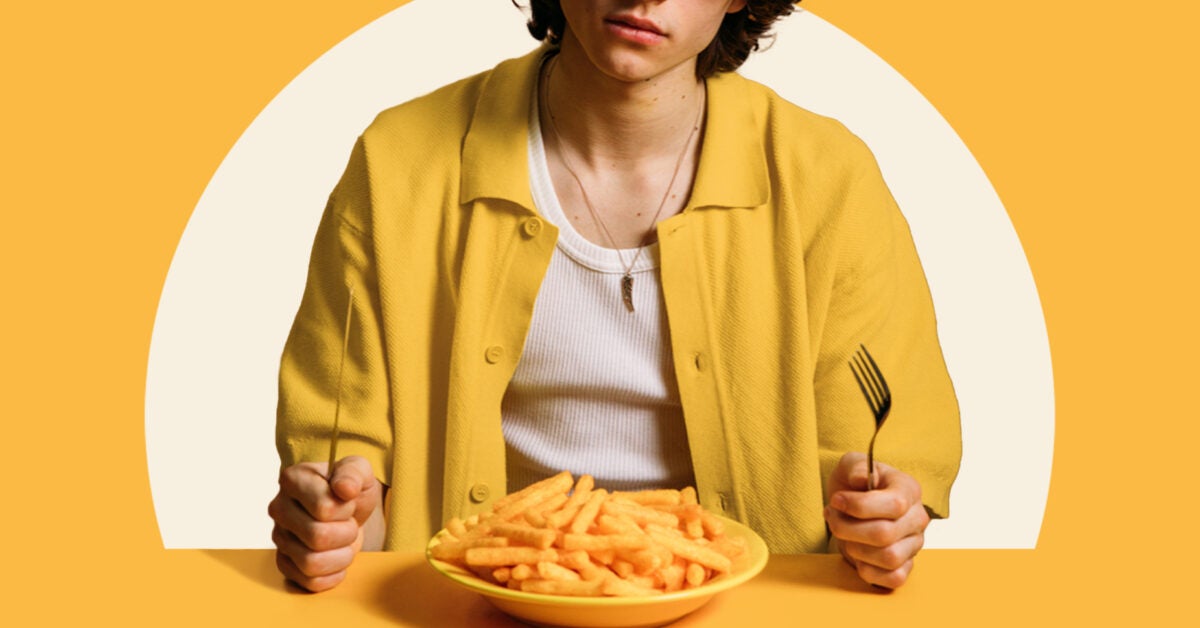 The pressures girls and women face to achieve unrealistic bodily ideals have been the subject of public concern for some time. A Facebook survey showing that social media negatively impacts the body image of teenage girls, for example, may even prompt congressional regulation.

But girls and women aren’t the only ones with negative body image. About 1 in 3 people with an eating disorder are men, according to the National Eating Disorders Association (NEDA).

Behaviors often associated with eating disorders, such as binge eating, purging, and fasting to lose weight, are almost as common in men as they are in women.

In fact, the prevalence of eating disorders in men is on the rise, according to a recent study by the . It is estimated that 10 million boys and men in the United States will experience an eating disorder in their lifetime.

The assumption among men, and even many physicians, that eating disorders primarily affect women .

and feelings of shame, men may deny their symptoms and hesitate to seek treatment.

In order to address the problem in a meaningful way, it is important to recognize the particular impacts that eating disorders can have on men, to identify those at high risk, and to find treatment options.

Eating disorders in women are generally associated with a desire to slim down and lose weight. But that’s not as often true for men.

“The symptoms one thinks of for a classic eating disorder are extreme or unhealthy weight loss behaviors, like vomiting or fasting, but the idealized male body image is actually not toward that same ideal.” says Dr. Jason Nagata, assistant professor of pediatrics. at the University of California at San Francisco, where he is studying eating disorders in adolescents.

“A lot of guys are trying to build muscle and gain weight, so a lot of these weight loss behaviors don’t really apply to them,” says Nagata.

A recent study found that in the United States say they want to gain weight. Close to a Also report taking supplements, steroids, or eating more to gain weight.

But the pursuit of extreme weight loss can also be a problem for men, especially in certain high-risk groups.

Steve Walk, 71, collapsed on the gym floor as a varsity wrestler in high school suffering from anorexia and bulimia to compete in a lower weight class.

Walk, a retired engineer and educator based in Fredericksburg, Virginia, has finally found a full recovery. He has spent years volunteering with organizations like NEDA to help people with eating disorders.

Male body image has evolved considerably since Walk’s school in the 1960s, with narrower ideals increasingly focused on appearance.

But you can’t always tell just by looking at someone if they have an eating disorder. While there may be some noticeable signs, “eating disorders are unique in that they have consequences for both mental and physical health,” Nagata explains.

Eating disorders can potentially affect all organ systems in the body. An obsessive focus on diet and exercise can lead to serious, even fatal, physical health effects that require urgent treatment. But it’s not always the case.

Nagata notes that it’s also possible to be in good physical health while experiencing extreme mental distress from diet, exercise, and body dissatisfaction.

Identifying eating disorders in men as a mental health problem is crucial in advancing understanding around them, as it has been with anxiety and depression in recent years.

Athletes, people of color and LGBTQ + people may be at eating disorders and their associated behaviors.

Body dysmorphia, an obsessive focus on perceived defects in one’s body, affects women and men at equal rates, according to the Anxiety & Depression Association of America.

Transgender people can experience body dysmorphia related to gender dysphoria, the term for distress related to discrepancies between their body and their gender identity.

“Transgender people, and gender diverse people in general, have a lot of body image issues because part of gender dysphoria is about appearance,” Nagata explains.

Growing up, Henry Giardina, a Los Angeles-based editor, thought he ignored messages to young girls about their bodies – enjoying extreme thinness and whiteness – because he’s trans and doesn’t identify with. like a girl.

But those familiar pressures eventually resurfaced in altered form as she transitioned.

“I didn’t really ignore them,” says Giardina, 33, retrospectively of messages targeting young girls. “I greeted them and waited for the moment when they could speak to me.”

After undergoing surgery in 2012, Giardina remembers moving from one place of bodily concern to another.

“My body problem was sort of sorted out,” he says of his transition. “Then it became like, the more weight you lose, the more masculine you will be. ”

Giardina discovered that he viewed male waifish musicians, like Morrissey and Michael Stipe, as a personal ideal of masculinity.

With continued help from her therapist, Giardina now works to actively combat the critical voice in her head and listen to her body. “I’m trying to come back to a natural place to recognize, ‘Oh, your body knows what it wants. “”

“Due to the potential combination of male and female body messages, gay men may be at higher risk for eating disorders, due to” lean and muscular pressures, or a combination of both, ”Nagata explains.

A found that sexual minority adults are two to four times more likely to have anorexia, bulimia or binge eating compared to heterosexual cisgender adults.

In addition to distinct pressures on body image, other minority stressors like discrimination, or psychological co-morbidities like depression, can contribute to the prevalence of eating disorders in gay men.

Images of immensely muscular men have become ubiquitous, circulating apps like Instagram and taking on outsized proportions in the Marvel Cinematic Universe and on billboards and magazines.

Recent confessions from Olympic divers like Tom Daley and “Eternals” star Kumail Nanjiani have highlighted the dangers of wrestling for the extreme muscular physique reflected so widely in pop culture.

But social media algorithms and Hollywood standards continue to propagate bodily ideals that can be dangerously inaccessible.

“Social media has been a really big factor in my eating disorder,” says Joseph Goldberg, 21, who suffered from anorexia, bulimia, binge eating, over-exercise and more, before he went. recover and volunteer to help others.

“I saw all these fitness people [talking about how] stay slim, ”says Goldberg, who is an Orthodox Jew and based in Boca Raton, Florida.

This fueled a fixation on avoiding certain foods not considered “clean,” like sugar and saturated fat. “It got to the point that it would take me two hours to do the shopping,” Goldberg said, as he pored over the ingredients on each label.

Larger cultural conceptions of how men are supposed to act also play a role in how men relate to wrestling.

“Toxic masculinity, and the belief that a man should keep a stiff upper lip at all times, is one of the main causes of the stigma that men cannot have eating disorders,” says Goldberg.

This feeling of shame and stigma is one of the reasons men are less likely to seek treatment or recognize their obsession with diet and fitness as a problem.

Treating eating disorders in their early stages increases the likelihood of full physical and emotional recovery, according to NEDA.

This is why developing screening measures specific to men, and fostering a culture of openness around the subject, is so important in combating the disorders.

While eating disorders can manifest very differently in men, the language around their diagnosis has remained tightly knit. until recently.

A number of terms have emerged regarding body image issues specifically when they apply to men.

Nagata describes muscle dysmorphia (sometimes referred to as “bigorexia”) as a concern or obsession with not having enough muscle, which can lead to steroid use and excessive focus on exercise. But even that is not technically considered an eating disorder.

“Even in the term eating disorder, the emphasis is on eating,” while the relationship to food may be only part of the problem.

Nagata ideally favors an interdisciplinary approach to treatment, including a physical examination, mental health assessment, as well as therapy and consultation with a nutritionist, to address any impacts a patient may experience.

Naming the particular bodily problems that men face and educating those who suffer and their caregivers is essential for developing effective treatment.

Not only that, but knowing that many other men are going through similar experiences can be an important part of recovery.

“Understanding that you are not alone is so powerful,” Goldberg says of his time participating and leading support groups with ANAD (National Association for Anorexia Mental and Related Disorders). Particularly because battling an eating disorder mentally can seem so isolating.

During his 50 years of recovery and mentorship, Walk, the former varsity wrestler, discovered the importance of normalizing eating disorders and learning to coexist.

“Radical acceptance is a huge element,” says Walk. “Eating disorders are part of the world, like oaks and bluebirds. It’s good, ”he said. “But let’s do something about it.”