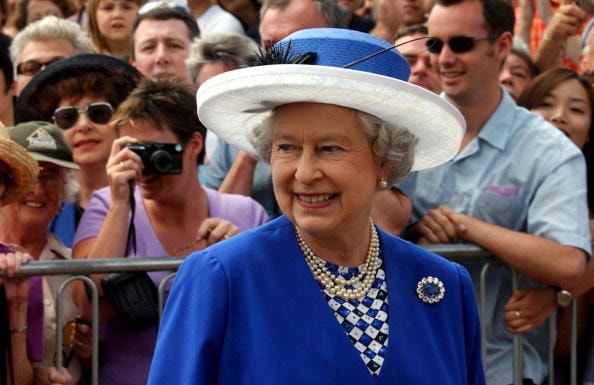 AUCKLAND, NEW ZEALAND – FEBRUARY 26: Her Majesty Queen Elizabeth II stops to meet and greet people as she walks to Waitemata Plaza in the Viaduct Harbor during her visit to Auckland on Tuesday. The Queen is in New Zealand for a five-day official visit, her 10th to the country. (Photo by Dean Purcell/Getty Images)

Queen Elizabeth II was the longest-serving monarch in British history and she was the world’s longest-serving head of state when she died peacefully on Thursday aged 96. While her official duties had been reduced in her final years, the Queen worked until her death, even going so far as to meet new British Prime Minister Liz Truss on Tuesday.

Not just living, but working and maintaining an active lifestyle into the mid-90s means Her Majesty was doing some things right to keep her so healthy. She had COVID in February 2022 but beat it and because of her health and wellbeing, she had only been hospitalized for three brief visits over the past two decades. A balanced diet, regular physical activity and maintaining a healthy weight all contributed to her long healthy life, and these were the habits she was known to follow.

In recent years, the Queen, 96, has suffered a handful of health-related episodes, according to CNN. These include knee problems in 2003, the removal of torn cartilage in his left knee and surgery on his right. Ten years later, the monarch was hospitalized for treatment for gastroenteritis, a common stomach bug. She sprained her back in May 2021, missing the Remembrance Sunday service in central London. In October of the same year, she spent a night in a hospital while she was undergoing “preliminary investigations”, the Palace said at the time.

Earlier this year in February, the Queen contracted Covid-19 and suffered mild cold symptoms, so she was able to continue with light duties. Since her diagnosis of Covid-19, the queen has been forced to cancel or iron out certain events more regularly. Marking 70 years on the throne, the Queen did not attend all of June’s Platinum Jubilee celebrations and missed the official opening of Parliament the previous month due to mobility issues.

Prince Charles, Prince of Wales, is the eldest son of Queen Elizabeth. He is the heir apparent to the throne of the United Kingdom of Great Britain and Northern Ireland.

See photos of Queen Elizabeth II through the years below: