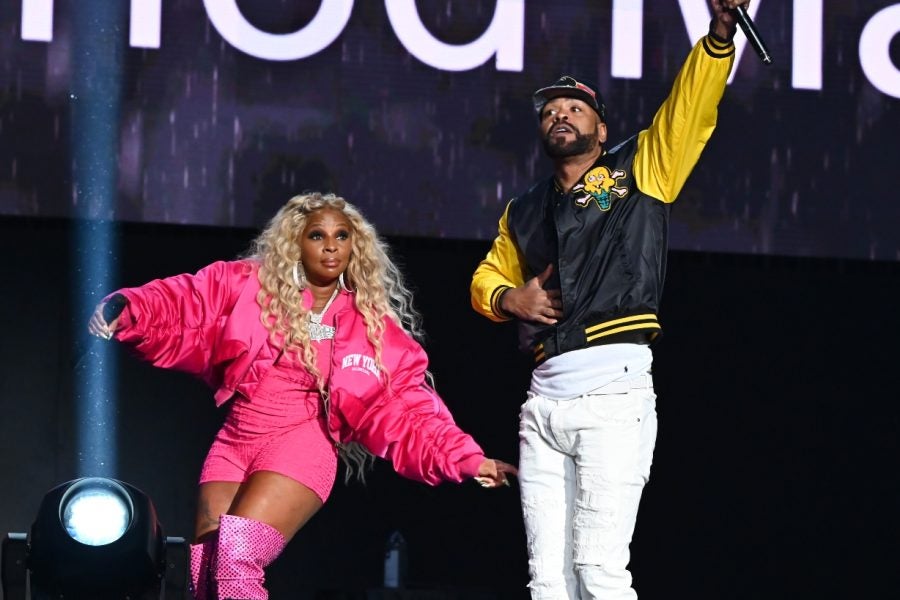 The Strength of a Woman concert series ended Saturday night with a bang at Atlanta’s State Farm Arena, delivering a night of nostalgia, emotion and feel-good moments. The line-up featured eight acts ranging from City Girls to Chaka Khan. Khan was among the headliners alongside Mary J. Blige and surprise performers Ella Mai, Usher, Summer Walker and Jermaine Dupri.

The opening acts of the night were Omeretta The Great and Baby Tate from Atlanta. Between sets, V103’s Kenny Burns and DJ Mars rocked the crowd with timeless classics and oldies. Queen Naija was the next act to hit the stage. She opened her hit “Bad Vibes,” wearing a hot pink sequined full bodysuit with backup dancers following. As part of her set, her dancers performed a dance break to Fivio Foreign’s “What’s My Name” before she performed her verse. Before leaving, she sang some of her most popular songs, including “Butterflies”, “Karma”, “Lie To Me” and “Medicine”.

After Naija’s release, the crowd was hugely hyped within moments as a snippet of “Tighten Up” exploded across the arena. After “Take Yo Man,” JT called out to the crowd, “Ladies, if your baby daddy don’t make a fucking noise!” A sea of ​​screams broke out. Next, JT performed some of his popular verses from “Said Sum Remix” and “Throat Baby Remix.” After telling all the women in the crowd to enjoy their Mother’s Day, Yung Miami and JT finished with “Twerkulator.”

Xscape performed their timeless classics “Who Can I Run To” and “My Little Secret” in the second half of the concert before closing it with “Understanding.” Chaka Khan (a living legend I never thought I’d see live) graced the opening stage with “Do you Love What You Feel”. This is when the show really takes on a nostalgic tone. The interpreter Chaka Khan belongs to another era. She knows how to dominate the stage with her presence and her charisma. His group is electrifying. A number of his hits, including “Sweet Thang”, “Through The Fire” and “I’m Every Woman”, had the whole crowd screaming, but his show-ending performance which included “Ain’t Nobody” raises the crowd.

After much anticipation, Mary J. Blige took the stage in an all-orange ensemble matched with orange sequined boots, performing the timeless hit “I Can Love You.” Mary then sang a series of her classic hits ranging from “Love No Limit” to “Looking for Love”. After a brief intermission, fans jumped for joy after Mary took the stage wearing a bright pink ensemble to perform “You’re All I Need,” which she performed with Method Man (whose ladies couldn’t not get bored and with good reason). With every passing moment, it was evident that Mary was beginning to feed off the love and energy of the crowd. After a brief intermission, she shared her meaningful remarks on what the festival meant to her.

Next, special guest Ella Mai performed “Boo’d Up” and a new single from her new album. Later, Mary surprised audiences by introducing Atlanta’s own Summer Walker. In the background, two guitarists accompanied Summer as she performed “Unloyal”. And the surprises only got better. After the summer, Mary returned to the stage to sing her new single “Good Morning Gorgeous”. As Mary asked the crowd if they would like to hear a song from her new album, Usher Raymond appeared on stage. “Bad Girl” was Usher’s tribute to the Queen after the duo performed “Need Love.” The final surprise of the night was Atlanta producer Jermaine Dupri performing “Welcome to Atlanta.” Mary closed the show with a performance of “Just Fine”.

If you ruined last weekend’s festivities, don’t worry. Mary J. Blige said she plans to host The Strength of A Woman summit every Mother’s Day weekend in Atlanta.